by admin on January 1, 2016 in Coffee, Coffee Beans, News, Uncategorized

There’s a great intensity of flavour with cocoa, dark chocolate, 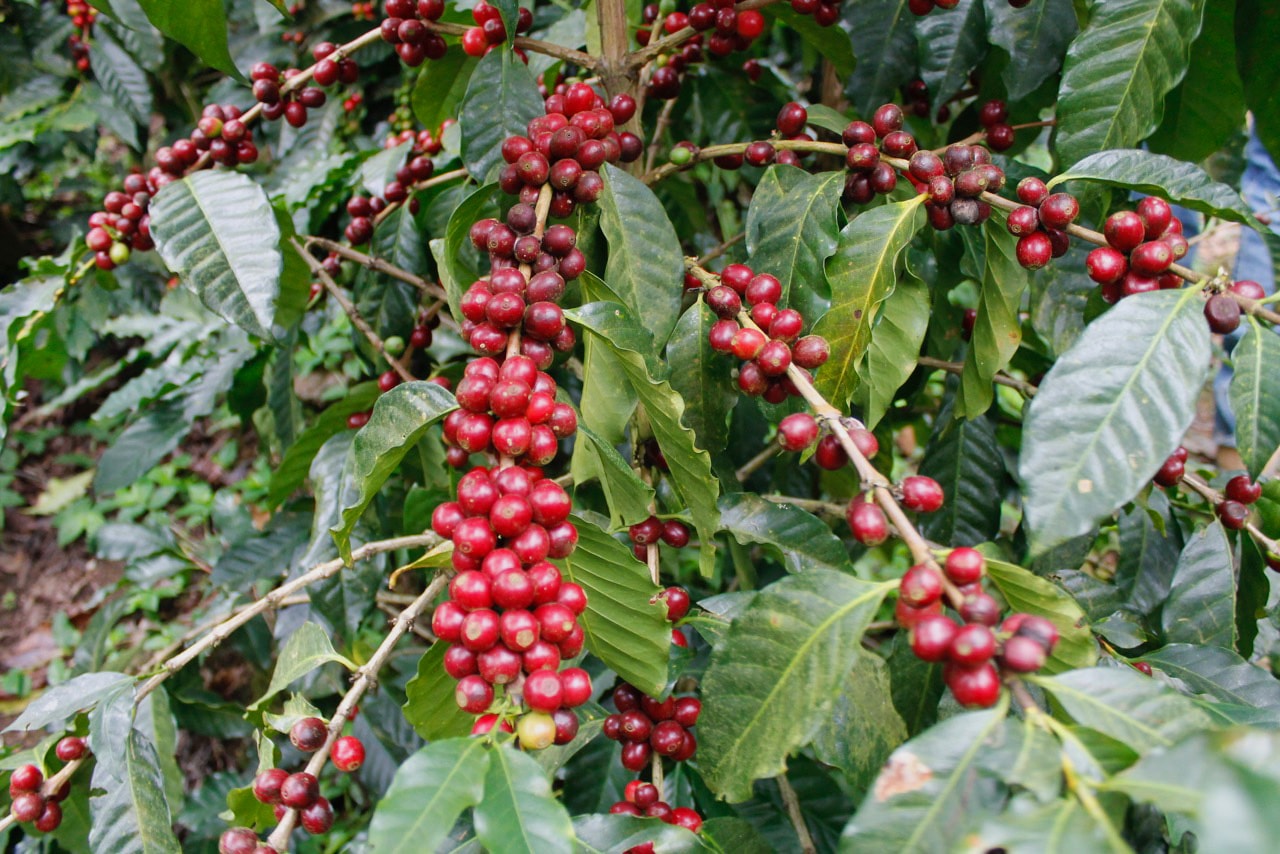 The harvest period in the interesting microclimate of the Santa

Barbara region where this coffee is produced is later than most of Central America, meaning this coffee is presently in the peak of its freshness. It was harvested in the early part of May and arrived in Australia on the 8th September.

The Honduran is being paired with a delicious characterful coffee from Huehuetenango in Guatemala which is a region also well known for producing great espresso coffees, used in the World Barista Championship almost as much as Ethiopians and Colombians.

Finding the perfect balance of the industry leading trends and quality associations of specialty coffee and the cultural traditions and history of “Melbournese” coffee has been a fantastic process, and we’re proud that Territory reflects this endeavour so well.

Most coffees of the world have some degree of nut, chocolate, fruit combined with some amount of acid and sweetness. Coffees also come with greater or lesser amounts of cleanness and body or mouthfeel. With Territory we’re combining several complementary coffees from identified producers, targeting lots of sugar browning (toffees, caramels, butter) combined with a delicate and clean fruitedness (some berry and other red spectrum fruits acidity, plump and ripe), with good intensity overall, a medium mouthfeel overall.

The roast level maintains and celebrates the inherent characters of the coffees meaning the predominantflavour is sweetness conveyed by delicate fruits and toffee/caramel aspects, not “roasted coffee flavour” which translates to: petroleum, rubber, char, burnt flavours that darker roasted coffee has. The result is a balanced and stable yet still interesting beverage great either black or with the addition of milk.

ExtrebertoCàceres – Farm name – “CielitoLindo”
Harvest: February to May 2015 Origin : El Ocotillo, Santa Barbara, HONDURAS
Terroir: 1620 masl. No shade trees due to cool climate at high altitude.
Botanical variety: Catuai
Process: Washed. Extreberto handpicks the cherries when they are fully ripe. After picking, the cherries are transported by horse to the farm to be pulped . After pulping, the beans are mixed with clean water from a local source and left for fermentation for about 12 hours before they are washed. The beans are then packed and Mr. Gutierrez drives the coffee for 45 minutes in order to get it dried properly at the nearest exporter’s patio.

General info:
Extreberto initiated cultivating coffee in the year of 2001, he worked very hard for several years as a laborer in other coffee farms until he had enough to buy his own land. He had a tough job producing since theres no road to get to his farm. In spite of this, due to his efforts he was rewarded for all his work and dedication with the second place in the CoE 2006 and fourth place in last years. He works and lives of his coffee land and production. He has worked his farm personally and coffee is the main income source for his six member family. He employs 2 permanent workers and 12 temporary ones during harvest. Extreberto fertilizes twice a year, in the month of May and July, at the beginning of the rainy season. He does his farms weed control by hand, applies tree pruning, with selective and sanitary purposes, his farm has no shade. Due to the farms altitude he has no plague or pest problems but he always samples for prevention. His harvest starts in February until June sometimes, a lot of walking need to be done in order to harvest collecting only the ripe cherries. He moves his crop with horses to the wet mill, located inside the farm, where he pulps the coffee in a 4 stream pulpier, gasoline engine propelled, in good condition. Using the least possible water from a water source that comes directly from the mountain to a protected tank. His fermentations are done in cement tanks for and average of 12 hours, depending on weather and moisture conditions. Then the coffee is washed and taken into cement patios to dry, this is done in the exporters patios. It takes Extreberto at least 45 minutes to transport by a rented pick up truck, his coffee to the nearest facility or exporter. He says his success lies in picking only the ripe cherries, remodelling of his wet mill, washing the coffee well, and on time, after fermenting. He and his family and workers are aware of the need for environment protection and give the proper process to pulp and residue waters. They also plant wood producing trees. He has continuously improved his farm during the last few years. 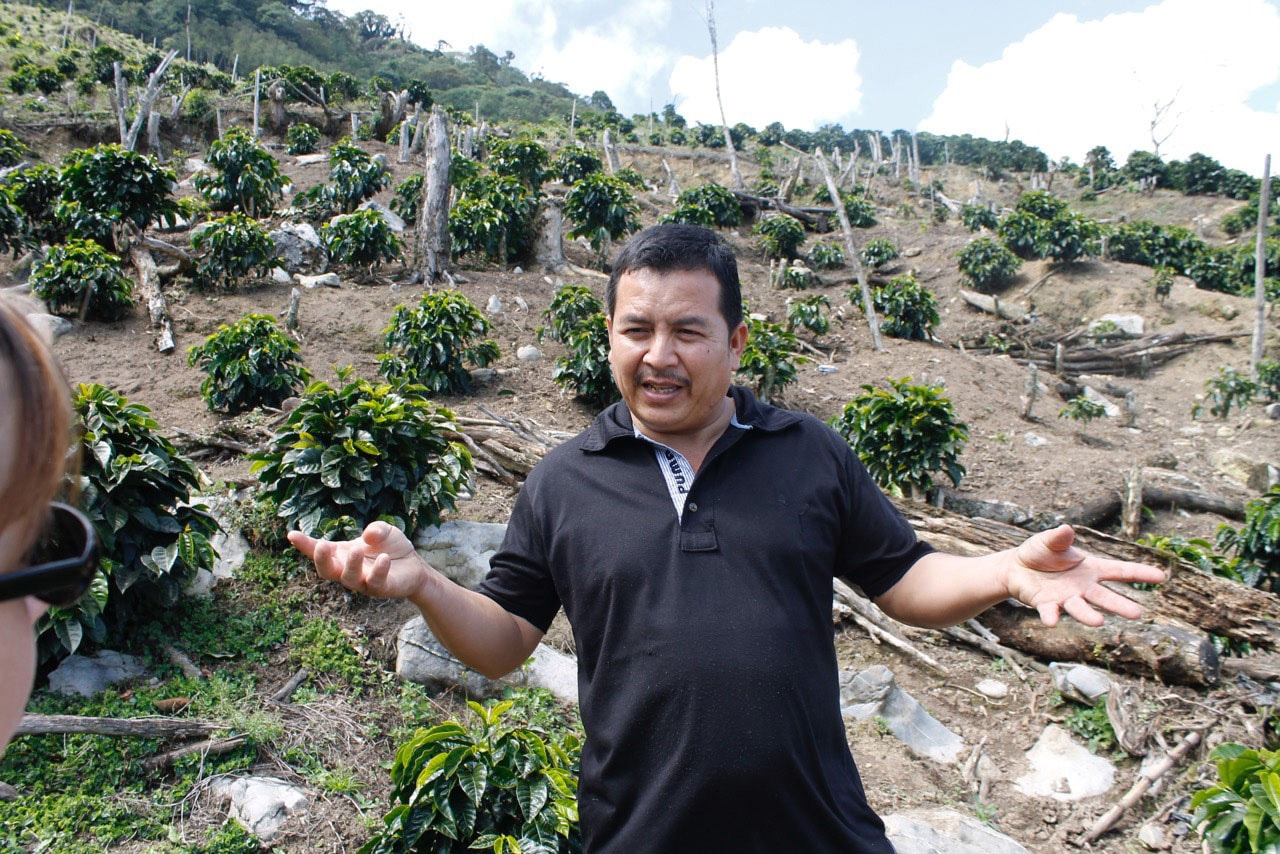 Don José Hernán Pérez – Farm Name – “Finca El Zapote”
Harvest: February 2015
Origin: Cuilco, Huehuetenango, GUATEMALA
Terroir: 1600masl, volcanic soil, shade trees
Botanical variety: Caturra, Catuai, Bourbon and Typica
Process: Washed. When the cherries reach their appropriate point of maturity, they are harvested manually and transported to wet processing facilities. Before depulping, the cherries go through a selection process, eliminating unwanted cherries. They are then pulped and subjected to a natural fermentation process, by which the substance commonly called mucilage is removed. The fermentation time is completed after about 38 to 72 hours, after which the beans are washed and sorted by density with clean water.

The washed beans are dried in the sun, which are distributed on concrete patios, for a period of 5-8 days until they reach the optimum moisture percentage for storage. Finally the parchment coffee is stored, ready for dry milling.

General info: Don José Hernán Pérez bought farm in 1960, only horse in and out and coffee taken the 40kms to roads on mule at that time. Planted in the 70s, bourbon and typica, in 1990 handed over to his son WilfridoHernán Pérez. All shade, mostly inga from which lots of nitrogen fixing in soil and lots of organic material on ground which protect soil from erosion and allows them to use very little fertiliser. disease and pests and weeds are all controlled organically. 2ha natural forest, water sources majorly protected by trees, no water contamination, mucilage treatment plant and organic compost for plantation. The average rainfall in recent years is 2000mm, between from May to December. The average annual temperature is 20 degrees. 90% of the farm’s topography is irregular, with slopes ranging between 10 and 50 degrees of tilt. The soils are deep, well drained and high natural fertility, fine granular structure, slightly acidic pH of 5.5 to 6.0, silty loam. The farm has three springs that are the source of clean water for processing. 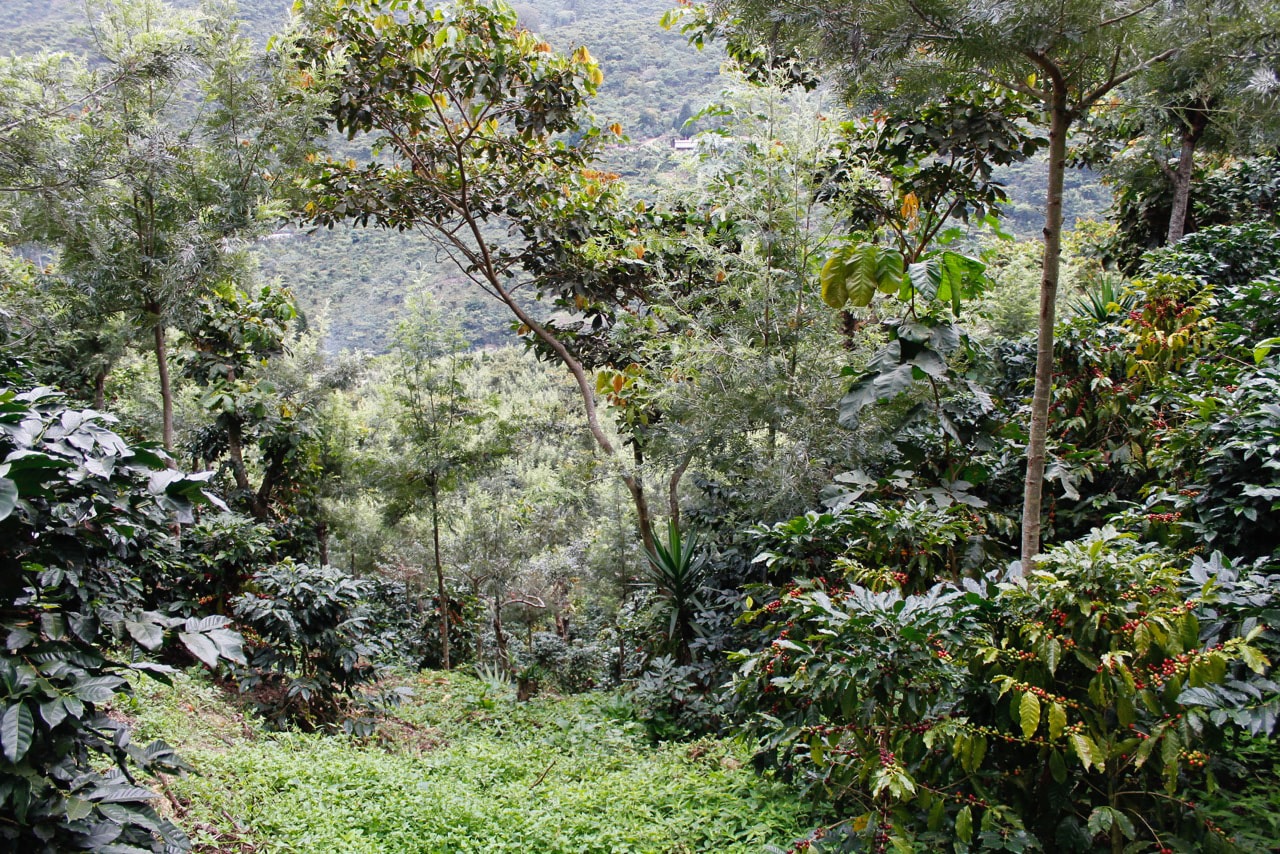